We’re fortunate enough to have a strong mathematics Curriculum and Instruction department in our district. Once a year, we take a day to do some district learning and site-based learning.

Gotta shout out my school here (even though I don’t think they read this – am I subtweeting?) because we were short several subs and lots of (amazing) teachers filled in so that our departments could go and work together. Thank you thank you thank you.

We spent the first part of the day doing math and then thinking about how we could assign competence (recognize smartness) in each other. So many ways to talk about this and think about this. We also got a chance to talk about some best practices in our work at our school, which was cool.

Photo: Poster form teams assigning competence to each other:

It’s always hard for me to think of something that’s my favorite that a) feels like it’s something I feel I’ve used enough to call it “mine” and b) is related to mathematics.

I’m rather fond of the 4 group roles we’re currently using in mathematics class (9th and 10th grade algebra and geometry). It’s hard to trace where the roles started from, but I’m fairly certain they’re from CPM and have been used frequently by folks from Grad Skool and in the Complex Instruction schools in our district. We’ve put our own emerging multilingual spin on them. Most of the credit here goes to my awesome Curriculum Partner and our Teaching Coach.

Here’s how it goes:

I seat kiddos in groups of 4 (or 5, if we’re getting stuffed to the gills, which, surprise, we are, right now). Each kiddo is given a role:

Task Manager: Responsible for getting the group started. Asks “What do we do?”

Group Manager: Responsible for making sure everyone understands. Asks “Do you understand?” (I lean on this one heavily; there have been disputes over whether such a closed question is useful, but I find it easy to ask and understand)

Communications Manager: Was responsible for making sure people are writing. I think I’m going to rewrite this one to make people put things in the middle of the table or helps with translation. Currently asks “What do we write/say?”

Resource Manager: Calls the teacher for group questions (if no one in the group knows and all resources have been exhausted). Says “Excuse me, we have a question.”

(Side note: I love the use of “excuse me”. So polite and makes it ok to ask other people things even if they look busy. Also the use of “we” rather than “I”.)

Evolution of How I Use Roles

I used group roles when student teaching and tried implementing them unsuccessfully for about 2 years.

The gamechanger was actually taking away structure. I used to assign each manager a role and them make them sit in a specific seat. Somewhere during Year 2 or 3, I gave up on assigning roles and just told all the kiddos in one corner of the table that they were Task Managers and went from there. I also taped the roles down on the table and one of my super awesome coaches taped the sentences on them.

It’s been a game changer. Mostly because I’m able to name and call different managers. Even if the kiddos don’t remember their roles (they often don’t), they are visible enough on the table that some of the more on-point kiddos can remind them.

How We Made the Roles

At some random District planning day, Curriculum Partner, Coach and I randomly decided to pick apart the roles. We knew about them and had tried to use them, but weren’t entirely sure about them. We decided that there needed to be a tension between someone who pushes the group ahead (Task Manager) and someone who slows the group down so everyone has access (Group Manager). We’ve always needed a Communications Manager and a Resource Manager, so those roles stayed.

(I teach mathematics at a high school entirely for emergent multilinguals who are recent immigrants. Groupwork is heavily encouraged in all classes.)

We’re still building schema about what it means to vote in the United States. So many of our kiddos come from countries where voting is mandatory that the idea that people can’t vote or choose not to vote can be tricky. This also helps us push at the idea that, if not all people vote, some groups may be underrepresented.

There’s a video of this group reading and I wish I could post it here (silly free account). Working in the middle, reading aloud, pointing to the words, referencing group roles. Pretty cool. 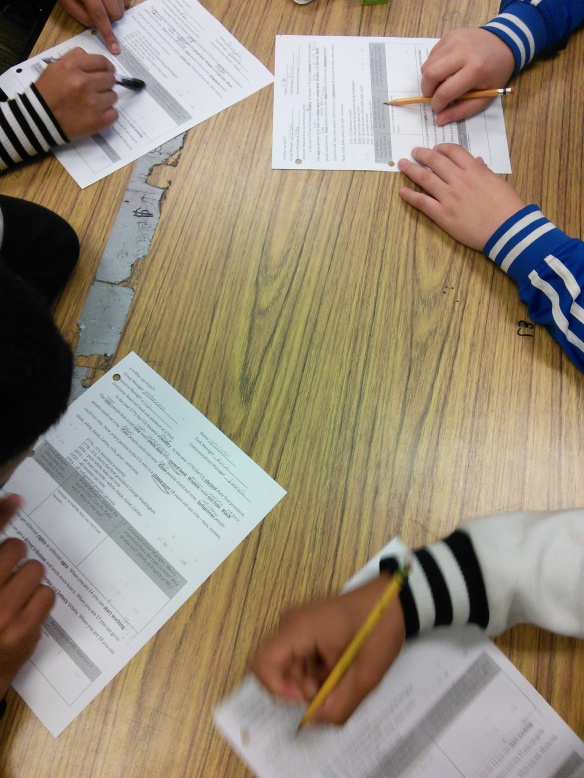 In an effort to keep kiddos engaged while practicing problems that are quick with a new twist (expression papers, with an opposite section), we rotate through stations. This time, we include a participation quiz, where we highlight the good things that kiddos are doing.

I thought I took a better video of this (I didn’t), but this is one of the kiddos explaining to another how to simplify expressions. Many representations. And a ton of empathy. Strong work.

I keep forgetting (or just denying) that Afternoon Me is the Worst Me (as the cool kids say).

We did a reading guide, which went slowly in some classes, just right in some classes/groups, and was a struggle in others. Now wishing I had been harsher and a bit more vocal with the participation quiz aspect.

Student work (from the afternoon, but still some solid work)

At any rate, I liked the opening. We showed them a bunch of windows and asked them how many there were. Almost every kiddo was talking or writing:

Teacher confession: after 1 class, a colleague pointed out that there were different numbers of small windows in each cluster, so my initial calculation of 900 was far greater than what many students calculated as about 768 windows.

Also, we cleaned almost all of the papers (except notes) out of the math section of our binders. Maybe this is the organized year. (Dinna hold yer breath.)

Thursday is also a Short Day (kiddo-parlance for early release days, where teachers stay afterwards and do professional development). Thursday’s PD ends up being time to work on our scopes-and-sequences, which we use to outline our courses in attempt to do some vertical alignment (vertical alignment being the staff-chosen yearly focus).

We spend Thursday working through graphs. Some of the kiddos can graph in their sleep. Some kiddos have never seen graphs. I try and make this explicit. We often frame this situation as such: some kiddos learned how to graph in their country, some did not (side note: this year, we’re viewing this through the lens of having the right to an education). It’s now time to remedy that. I appeal to kiddos who know how to graph to be empathetic and support those who don’t know how to graph yet. I appeal to kiddos who don’t know how to graph to try hard and ask questions. (Graphing isn’t really groupworthy, anyway.) We do an explanation quiz, again, where kiddos have to make the graph, then call me for a checkpoint. It feels like more of a familiar structure now. I remind myself that repeating structures often in the beginning of the year (and the rest of the year as our classes continue to grow) is important.

Photo: So many graphs. 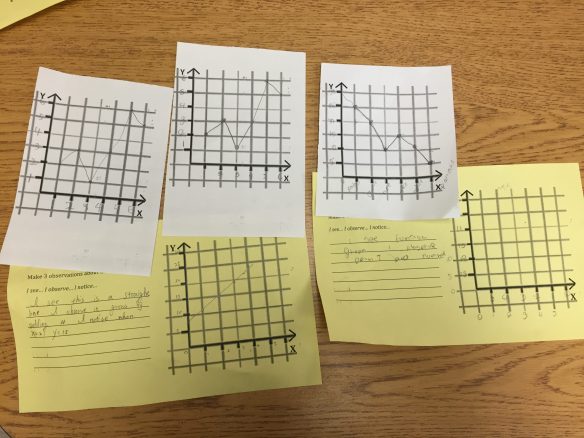 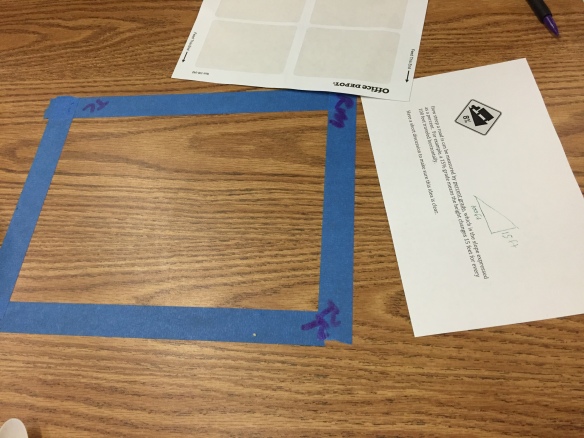 Middle space from the opening of the 2nd day of district planning days. What do you notice? What do you wonder?

Showing our work during a group (involving sausages and division) for day 1 of district planning. What do you notice? What do you wonder?

Postscript: I cut out 30 minutes early to watch Ms. Minjares get married. It was a good day:

Lesson Plan is here, based on curriculum by CPM and our school district here.

The worksheets we gave to students are here. 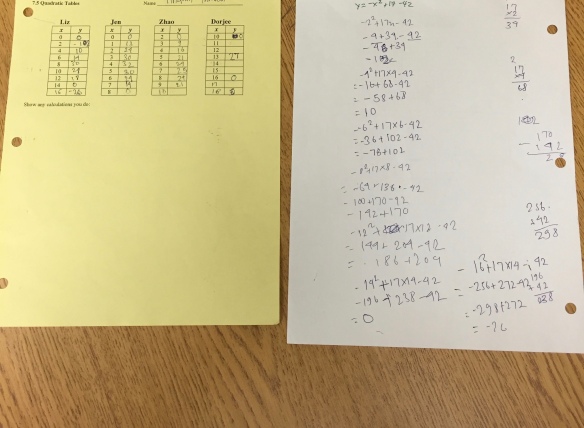 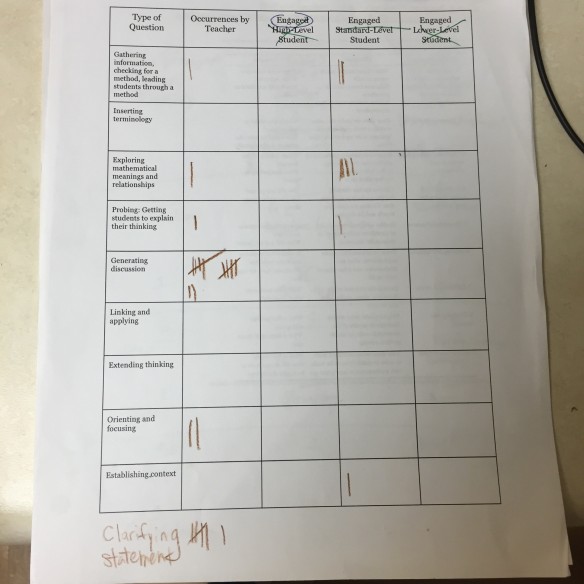 Came back from a sub day (got to attend a meeting with fellow rookie math and science teachers) and went straight into two check-ins and a group quiz.

How was your Monday?

After we switched groups (did I mention today was busy?), kiddos pretty much got right to work. At Curriculum Partner’s suggestion, we did an opening about what groupwork looks like, cleaned out folders (sort of) and got to work.

Kiddos got most of the class period to work together and talk through four problems. Problems are written so that kiddos fill in what they know – they get some basic information to get them started, but have to fill in steps or explain or pick and justify an answer, so that everyone has a bit of access, but still has to say what they know.

Individual test tomorrow. So many projects still to grade. We’ll see how it goes.